No animal, is for me, quite as exciting as a wild wolf. There is the difficulty in catching more than just the briefest glimpse; their charisma and complex social behaviour; that haunting, beautiful sound they make and then all the historical and cultural resonance we have attached to them, running from myths and fairy tales to our relationship with dogs. All of this is part, at least, of why these animals have such a draw for me and I suspect I am not alone in feeling that.

The first time I sailed up into the Great Bear Rainforest I stayed for four months. In that time I had two brief wolf sightings (on the same day and maybe the same animal) and I heard one wolf howl. Despite all the beautiful places I went and the many amazing encounters with bears, whales and other animals, seeing and hearing wolves was far and away the most exciting aspect of my trip. So the next year I returned for more. These images are from that trip and a subsequent trip, when I was lucky enough to have some extraordinarily intimate encounters with a number of wolves. 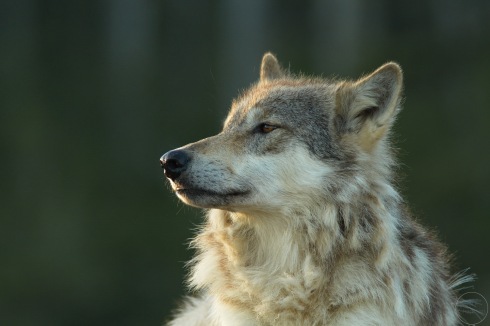 I was lucky enough to spend an evening with this lone wolf as it relaxed on the beach. 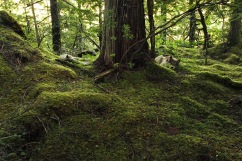 The tree in the centre of this photograph is a western redcedar, one of the defining species of the rainforest.

This wolf was both curious and wary of me, finally approaching quite close before eventually losing interest.

The sea withdraws allowing the wolves to forage on barnacles and other crustaceans. 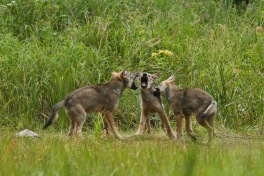 Between bouts of playfighting these pups would explore the nearby marsh.

On one occasion while watching these pups exploring, they all suddenly vanished. A minute later a bear emerged from the woods and ambled past. Shortly after the pups re-emerged.

The dappled light of the forest at midday can be tricky to expose for but the effect can be quite ethereal. 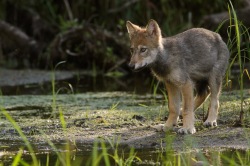 Resting in the dappled shade of the forest in the heat of the day.

Wolves howl to communicate with each other, however it can be informative for the would be wolf tracker too. On several occasions I have followed the howls to the wolf.

Wolves inhabit most of the larger islands in the Great Bear Rainforest, these islands support deer but wolves also rely on the sea for much of their food. 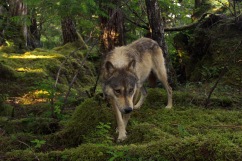 The dense undergrowth in the forest makes it hard to get a clear shot of any wildlife at distance so it helps to have a subject so totally at ease as this wolf.

These pups are looking out over the river where salmon are starting to pool below.

Taken on one memorable afternoon that I spent with two wild wolves that snoozed away the hours within a few metres of me. They were relaxed but still always aware of their surroundings, a shuffle or noise from me and one eye would snap open to check I wasn’t up to anything.

After finding scat and hearing howls nearby I decided to set up to watch from the other side of this narrow lake. With the sight of a wolf emerging from the forest, after hours of waiting with slim chance it is almost easy to believe you are dreaming.

High tide transforms this wolf’s home from a large arena of easily traversed mudflats into a maze of channels and islands. Wolves aren’t shy of about crossing water however..

About as close as my lens focuses. 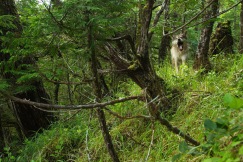 In coastal British Columbia wolves eat salmon. When I found this pack there were great numbers of coho salmon massing at the mouth of the river preparing to move upstream to their spawning grounds. When they finally did the wolves were waiting for them in the shallow rapids. After a day and a half the salmon had their reprieve though as the river flooded and they were easily able to make it past while the wolves could only watch from the bank. Then by the time the flood was over all the salmon had made it to safety in the lake upstream and the fishing was over for another year for these wolves. 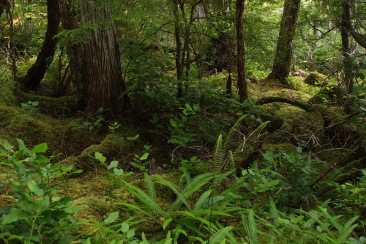 The forest floor in the rainforest is extraordinarily lush despite. Crackling salal leaves betray any attempt to steal up on a wolf in the forest, fortunately this wolf was not terribly bothered.

A special and intimate scene I was lucky enough to see.

They do sleep a lot.

In my experience adults wolves spend a lot of time sleeping.

I tagged along with this wolf as it hunted for mice in the meadow. 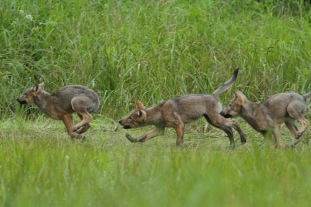 At this ‘creche’ site these wolf pups fought and chased each other to their hearts content while the adults rested in the shade. 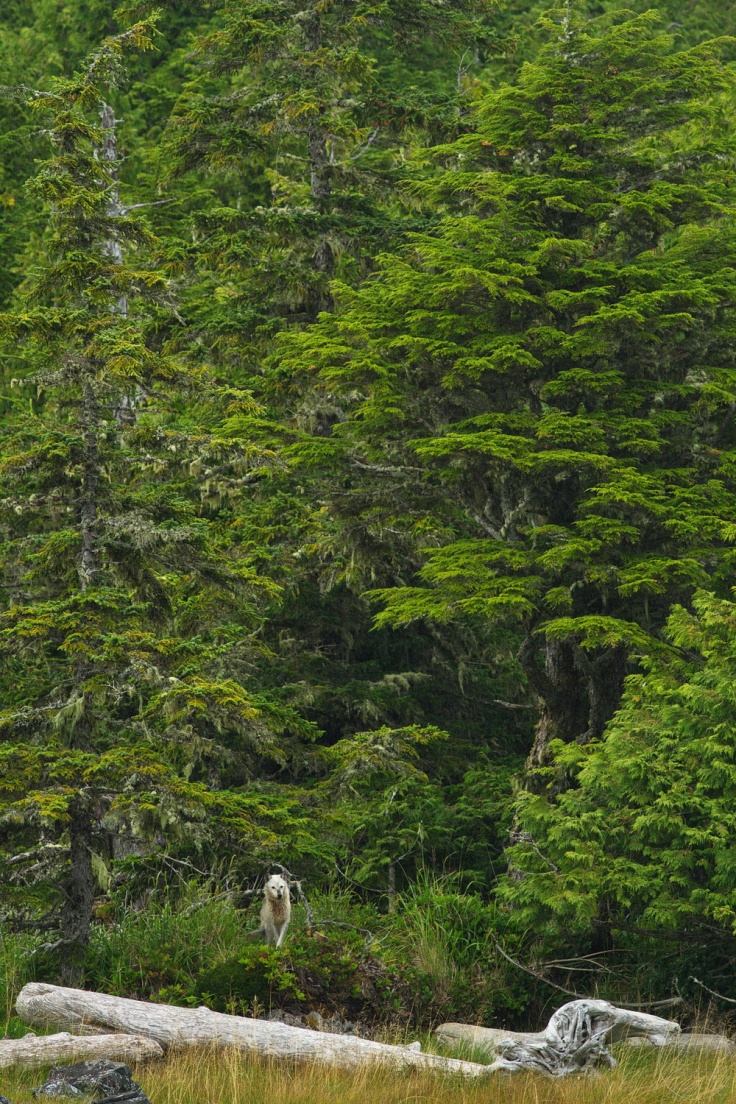 It is of course much easier to spot wolves in the open than in the dense forest.
Kirkennan House, Palnackie, Dumfries and Galloway, Scotland, DG7 1PE